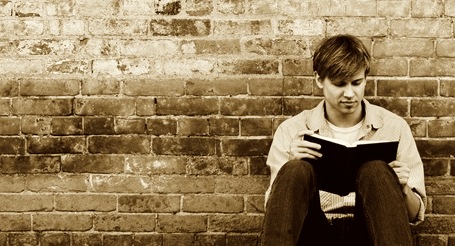 He comes in every day—you can set your watch by him—and sits down to read a novel he’s toting. Brainy guy, one of those “beautiful mind” types whose IQ probably tops out on the far right of the bell curve. One day he has Moby-Dick. The next time it’s Complete Works of Isaac Babel. Then it’s Gravity’s Rainbow, Ulysses, Infinite Jest. You’ll never see him reading Twilight or Jodi Picoult.

I was talking to him the other day, in this coffee shop we both frequent. I almost hate to do this—talk to him, that is. He’s a pretty private kind of guy; you an tell by the body language he wants to be left alone. At the same time, there aren’t a lot of people who are as interesting, so I do engage him in conversation sometimes, occasionally.

He had just finished Moby-Dick for the umpteenth time. He enjoyed how it was a novel of ideas, how it rambled and meditated on all sorts of ideas and issues. We started talking about our favorites when I mentioned that so often when you tell someone you’ve read or are reading a particular novel the first thing—usually the only thing—that want to know is “What’s it about?”

In other words, he said, they want to know about the plot.

He fairly bellowed, “Plot is overrated!”

I couldn’t have said it better myself.

I don’t believe plot is really all that hard. Sure there are some works of fiction with amazingly intricate plots that dazzle me, but a good voice will always impress me more than a complex plot. There are almost mechanical ways to construct plots. Of course there is the shadowy, imprecise concept of genius, which resists all formula, but in a lot of ways plot is like rhythm in music—almost mathematical, chartable.

But what makes one voice so compelling that it stays with you your whole life, haunts you? Why is it Beethoven wrote in sonata form just like hundreds of other composers in his day, but it’s not the other composers we remember? Why am I listening to the Archduke Trio right now as I write this, still finding new twists in a work that’s over 200 years old?

Why does the opening of Deborah Eisenberg’s short story “Presents” astonish with its novelty:

The waves go on and on—there is no farther shore; a boat here and there in the dark water, a cluster of fronds, an occasional sunset. Cheryl closes her eyes and the warm night blue water rushes out around her. “Think it’s really like that?” she asks. Cheryl’s voice is arresting—low, and with a city accent that gives each word the finality of a bead dropping into place along a string; sometimes strangers to whom she speaks pause before responding, and look, if they haven’t looked before. “Think it’s really that blue?”

“Blue?” Carter glances down at his shirt. “Nothing’s this blue. Not even this. It’s the lights in here—make everything vibrate.” He tips the little glass bottle in his hand and spills a neat white line from it onto his forearm, which he extends to Cheryl with balletic solemnity.

I have to admit, after an opening like that, I don’t care what the story is “about.”

Back to my friend at the coffee shop. Today he had a new one; he was sitting far away and I couldn’t read the title, but it was thick and no doubt challenging. Its author no doubt created a whole universe of laws, of causes and effects as unique and detailed as the actual universe we live in, Einstein’s universe, Bohr’s universe. Think of literature that way. Like the real universe, it becomes a lot more interesting when you do.

“Plot is overrated!” I can still hear him bellowing.

Even the most isolated misanthropes need to connect, in some form or other…
From the monumental book Beethoven, His Spiritual Development by JWN Sullivan, published 1927:

This contempt [that Beethoven had for the masses, despite his constant yearning to connect with and embrace humanity] was by no means always savage; it was often robustly good-humored.  But there can be no question but it was there.  It was perfectly compatible with that love for humanity he afterwards professed, for that love was based on the vision that came to him of humanity as a suffering humanity…To such a man the majority of human being are more or less random collections of borrowed emotions and borrowed ideas.  They are, to an extent he finds it difficult to understand, the result of their accidental circumstances.  He feels in them an entire absence of the integrating strength and courage that dwells in himself.  Their culture and morality, their aims in life, even their joys and sorrows, seem to him merely characterless reflections of their environment…They are never honest. for the last thing they wold want to face is themselves in their essential loneliness.  With such creatures a man of Beethoven’s kind could never be really intimate.  He could treat them with rough good humor or, if they offended him, he could blaze out in contemptuous wrath.  But he could never treat them with the consideration and respect that a man shows towards his equals…Beethoven had plenty of enemies who could never forget the wounds to their vanity that he had inflicted.  But also, besides the men he genuinely respected, he had plenty of friends who put up with his contemptuous lack of restraint.  At times he tried to be coldly diplomatic towards people and to conceal from them the contempt he felt.

And he had to, for, like Mozart before him, he had very few friends who truly were able to fathom the genius in their midst.  For most people genius is just “somebody who’s really smart.”  And often really lonely.